Being a Good Neighbor: How One Greenville, SC, Community Took it a Step Further

“Good fences make good neighbors.” You’ve certainly heard the adage and, at times, have probably found it applicable to your own neighbors.

However, that couldn’t be further from the truth for one Greenville, South Carolina, community.

The Taylor family moved to South Carolina to escape the harsh Northern winters. They were able to 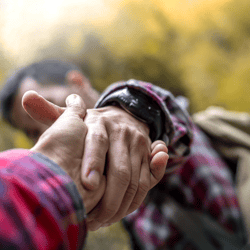 As if buying a new home in a new area wasn't stressful enough, the Taylors began experiencing health issues shortly after arriving in Greenville.

Dealing with a big move and a new house is not easy; add health issues to that, and you’ve got a stressful situation on your hands.

One day in October 2022, the Taylors were out running some errands when their neighbor (and community board member) across the street, Seth Cooper, happened to be returning home from his night shift as a firefighter/fire safety instructor. This may seem like a mundane, perhaps even useless, detail, but it’s key to this story.

Mr. Cooper had recently left his job in fire department administration to return to firefighting at another firehouse. He just happened to be working the late shift the night before the blaze and, therefore, was getting home the morning of the fire. Had those changes not occurred, he wouldn’t have been at home to notice something was amiss.

What was amiss? There was smoke coming from the Taylor’s home.

He reached out to Mr. Taylor to see if they were home – there was smoke coming from inside, and he wanted to ensure they weren’t there. Indeed, they weren’t home. Something was wrong.

Mr. Cooper quickly sprang into action, called 911, and then raced across the street with his fire extinguisher 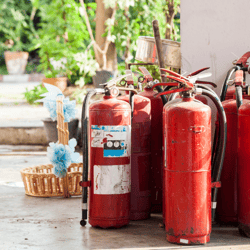 and several others he had in his garage from the fire safety classes he had been teaching. He had put out the fire by the time the fire department arrived. If Mr. Cooper hadn’t taken such quick action, the house would’ve been a total loss.

Sadly, the Taylors had pets in the home - 11 cats - that did not survive the blaze. With the financial struggles and health issues the family had been facing, they couldn’t afford to take the animals to a veterinarian and didn’t know how they’d be able to give their pets a proper burial. But, as you might imagine, Mr. Cooper’s neighborliness didn’t end when the fire was extinguished. Instead, he volunteered to take the cats out to his family’s land and bury them, a thoughtful gesture that took some of the devastating, yet necessary, worry off the Taylor’s plate.

The Taylors had to move out for a bit for the home to be repaired. Considering the emotional toll the fire had taken, the loss of their pets, and their health issues, finding a temporary place to stay was another burden they didn’t need.

Luckily, Mr. Cooper isn’t the only kind, helpful person in the neighborhood. Another board member, John Turner, helped organize remediation efforts and invited the Taylors to stay in his home until they could return to theirs.

Further, Mr. Turner started a fundraiser to raise money to cover the repairs needed to the Taylor’s home. Again, community members jumped at the chance to help their displaced neighbors.

But it wasn’t just money that was donated - time, professional skills, supplies, and even appliances were all offered by neighbors and businesses in the Greenville community.

Jeff Lynch Appliances, Electronics, Bedding, and Furniture, a local business in Greenville, donated kitchen appliances to the family at no charge. In addition, Greenville Greens’ Community Manager, CAMS’ Rebecca Duncan, contacted Arnold Roofing and Restoration, and they were ready and willing to help this family. However, the residents of Greenville Greens were working quickly – they had already completed much of the work using experts who lived in the neighborhood. Even a sheetrock installer came in at no charge to finish repairing the walls. 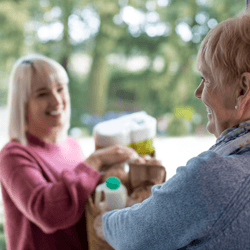 Throughout the project, Ms. Duncan was able to use her expertise to coordinate with service providers to ensure everything was being taken care of properly. She also regularly sent e-blasts to the community to update them on repairs and relay the Taylor’s appreciation to everyone who volunteered to help.

Through the community coming together to pool resources, find neighbors to help, and keep an eye out for each other, they didn’t end up needing the many contractors that volunteered to participate in restoration. Instead, many community residents had the various skills to repair different areas of the home and were more than willing to step in and guide their neighbors through a rough time.

What could’ve been an absolute nightmare turned into a heartwarming story about neighbors helping neighbors. The Taylors were back in their home within three weeks, thanks to the quick action of Mr. Cooper and the willingness of their neighbors and board members to spring into action and help wherever they could.

While Mr. Cooper extinguished the fire, to him, it’s all about being there for neighbors when they need it.

“I’m just glad I could help my neighbors when they needed me,” Cooper said. “It’s all about supporting each other during hard times.”

This story is based on a real incident that occurred in one of CAMS’ Communities. People’s names, community names, and other identifying factors have been changed to protect the privacy of those involved.

Ready to make the SWITCH?

Let us take care of the details.

Most Neighbors maintain that the biggest benefit of their association is preserving the value and integrity of their individual investment. learn more >

What people are saying about us on Google

Choose one of these options:

We provide emergency service for extreme property damage 24-hours a day, 7 days a week. Call 877-672-2267 and follow the prompts for the emergency line and leave a detailed message for a call back.